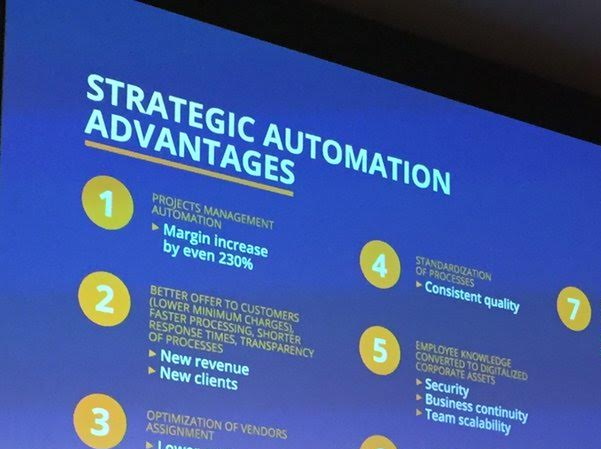 From size to essence

Growth for traditional translation services slows down year to year. It’s getting increasingly difficult for LSPs to win new customers and increase revenue, and marketing is getting more competitive. According to the 2016 bench marking survey and accounts for the latest financial year, at least five out of 20 if the UK’s largest translation companies did less business in 2015 than in 2014, or stayed flat. The number one company based in the UK, SDL, stayed on more or less the same level of revenue since 2012. RWS, the second largest LSP, grew 2% organically last year, but added about 25% via an acquisition of another organisation, CTi in the United States.

In a few years organic growth might grind to a halt.

Some managers of mature companies have already switched the focal point of their efforts to cost control and profitability. They are looking for ways to make their businesses more profitable, rather than just bigger. 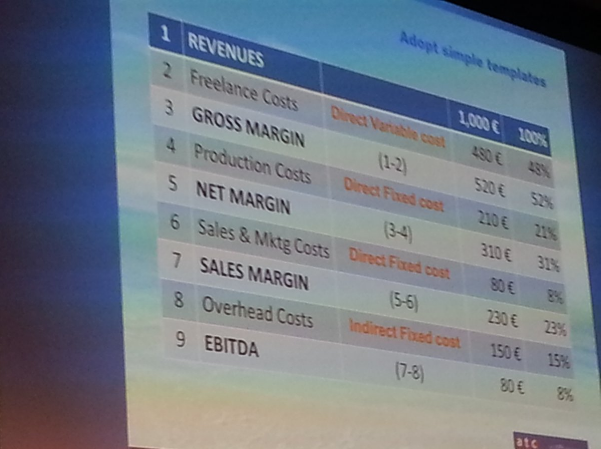 Ruth Partington of RP Translate spoke about communicating value to customers and maintaining margins. She called business owners to deconstruct their offers and identify individual services involved in making content multilingual, for example document engineering and file preparation. She advocated creating a pyramid-like hierarchy, with the highest-value added services on top, and communicating the value to customers this way, service-by-service, according to the value they represent. This solution approach is more rewarding.

Andrzej Nedoma of XTRF advocated process automation. His presentation suggested that margin erosion is a problem for 80% LSPs. To fight it, he suggested replacing manual project management with automated workflows, which would reduce in-costs and make the business more efficient.

– 21 out of 50 companies participating stated they capitalise on the differences in translation memory discount schemes for their customers and translators.

– 60% companies provide discounts for repetitions to less than a half of their clients. However, this refers to the number of customers, not their size. Large-volume buyers are more aware of translation memory benefits.

– Companies that run large translator teams offer customers discounts for repetitions as calculated at project evaluation. Later on they leverage real-time matches created as translators on the team reuse each other’s memory.

– LSPs with branch networks optimise costs via smart new office placement. For instance, TranslateMedia merged two US offices into one and opened up a legal entity in Poland, which helped the company to be profitable in 2015. translate plus and Sandberg Translation Partners launched offices in Bulgaria in 2016.

Voice could be more appealing than translations

In contrast to heavily commoditised translations, voice-based language services appear as fast-growing. UK’s public interpreting market size has been revealed this year. Frameworks agreements concluded in 2016 by Crown Commercial Service, Ministry of Justice, National Health Service and Eastern Shires Procurement Organisation tot up to between £326 and £600 million over a span of four years.

In a parallel development, video content is becoming more and more prominent on the Internet as compared to text, and video needs voice overs and subtitling. More companies are moving into multimedia business. Fresh examples in the UK include the fast-growing Voicebox, a voiceover company launched by the CEO of translation company Wolfestone Roy Allkin in 2014, and an acquisition of a voice talent company Side UK by Japanese firm Pole to Win. Pole to Win’s UK LTD entity grew by 88% to £13 million in the financial year 2015. 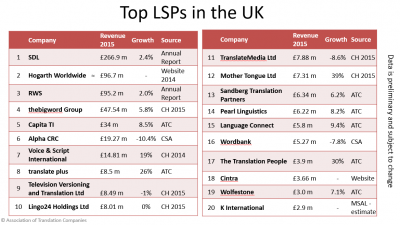 My presentation with the preliminary results of the 2016 ATC research and bench marking project delivered at the ATC Summit mis-stated revenue of Pearl Linguistics.

The presentation mentions a turnover of £4.69 million in 2015 and a negative growth rate, whereas it should be £6.22 million, with a grow rate of 8.2%, as per information provided by the company. I have updated the figure with the correct amount in the table above and in all further publications on the research.

The full results of the 2016 UK LSP Market report will be published towards the end of November and can be purchased through the ATC site.

The Demand for Farsi Translations is About to Go Boom! Are you Ready?

The UK is no longer in the EU and a new, stricter immigration system will…