Did you know French is the world’s third most important business language?

It doesn’t take a genius to figure out why. With more than 220 million French speakersworldwide (along with 70 million partial-speakers), it’s Europe’s second most widely spoken mother tongue, and is in the top 10 most popularly used languages on the internet, too. Furthermore, French is the official language for about 29 countries, including countries that account for 20% of world trade in goods.

You’d be right in thinking that this positions it as one of the most useful languages around – and one that, certainly, qualifies for further consideration when you’re looking to translate aspects of your business.

Grab your passports – let’s explore the idea a little more, shall we?

Other businesses are there.

French was the common “international language” for business and diplomacy for many years and remains an official language of the UN, NATO, World Trade Organisation and the International Olympic Committee. Ensuring your business communicates in French, then, implies that you’re in very powerful company!

The proof is in the pudding – businesses worldwide are using it, from pharmaceuticals to media publications to all sorts of marketing disciplines and – crucially – to tourist-centric companies, too such as Get My Boat, a boat rental service that connects boat owners and operators to customers worldwide. Employee Jess Segraves commented:

“French has enabled me to work easily with the Canadian and French media, website owners and webmasters quickly and efficiently. It’s extremely important for our international reach – a global marketplace does not just serve the English-speaking world!” We couldn’t have said it better ourselves.

“The whole of Paris is a vast university of Art, Literature and Music… it is worth anyone’s while to dally here for years. Paris is a seminar, a post-graduate course in everything.” – James Thurber

France has around 30 sites on Unesco’s World Heritage list (it’s fourth on the global rankings list) and it’s also home to the famous Louvre, which houses roughly 35,000 artifacts and attracts nearly 10 million visitors a year – more than any other museum in the world.

These are just two examples out of a list of many. France is very famous for its links to many of society’s beloved cultural disciplines, including fashion, cooking, art and architecture. You’d be hard-pressed to find a creative niche that the French haven’t famously excelled in, in fact – a proficiency which has bought them linguistic dominance, in turn, among many academics, creatives and tourists.

French isn’t a language that just has positive practical implications, therefore: it pulls at the heartstrings, strikes a chord – and ultimately makes you memorable. 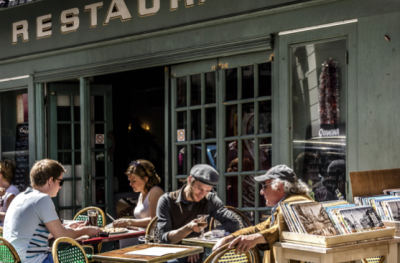 It’s an easy language to learn, for one (particularly when pitched against others like Mandarin!). It’s also one of the world’s most popularly shared official languages, spoken in Belgium and Luxembourg (Europe), Cameroon and Madagascar (Africa) and North America (Canada) – to name but a few, giving it real global scope. Not only that, a lot of people feel inspired to pick up French recreationally due to its cultural symbolism (as aforementioned); the “fashion” of the language helping spread its reach even further.

When you’re communicating in French, you’re not simply speaking to those who are native to France – you’re speaking to the millions of people who’ve picked it up or adopted it in other countries where it lives as an official language. In picking up French, thus – you join a global community.

“The French air cleans up the brain and does good – a world of good.” – Vincent Van Gogh

The largest country in Western Europe and bound by the North Sea, English Channel, Mediterranean Sea and Atlantic Ocean, France borders six other countries, which makes it ideally suited for international trade and tourist accessibility.

Not only this, according to the French government’s website, last year the amount of Asian visitors coming to France increased by 22%, and American visitors by 15.2%. France isn’t justideally positioned for European visitors, then, but possesses significant global draw; placing it very much in the international spotlight.

There’s a reason why people are calling it “The Language of the Future”.

The French-speaking global population is growing so rapidly, research by investment bank Natixis suggests it may be spoken by 750 million people by 2050 – overtaking both English andMandarin.

Theorists suggest that this might be in part due to the fact that Mandarin, one of the world’s most spoken languages, is excruciatingly hard to learn and may shift with “China’s certain demographic slide”. In contrast, French is easy to learn, present on all continents, in the global spotlight and one of the primary languages spoken on a continent projected to be economically prolific by 2050 – Africa.

“French is a language that makes those who speak it both calm and dynamic.” – Bernard Pivot, French journalist