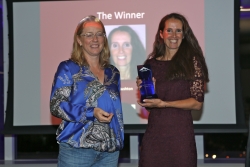 Freelance suppliers shortlisted for the influential 2017 Language Industry Awards will receive a 50% discount off the cost of this year’s Annual Summit organised by the Association of Translation Companies.

The deadline for nominations to the industry’s annual awards, which are designed to recognise and celebrate excellence in the UK’s £1 billion language sector, is Monday 18th August.

Anyone shortlisted as Freelance Supplier of the Year will not only receive half price entry to both days of the 2017 Language Industry Summit, but will also enjoy a complimentary place at its Gala Dinner on 21st September.

Vicki Rushton, who was named Freelance Supplier of the Year at the 2016 Summit, explained what the award meant to her: “I was absolutely thrilled to bits to be nominated by Comtec and then go on to win the ATC award,” she said. “The recognition from Comtec was a personal win for me as it showed how much they valued me as a freelancer. It was also a thank you for the many years spent translating at home by myself.

“As a freelancer you don’t often get much feedback from the agencies you work for or the clients further down the chain, so the award was fantastic. Comtec have a great team of people working for them and I am proud to feel part of that team on the back of my win. So on a personal level, it gave me a huge boost.”

The judging panel comprises Rudy Tirry, President of the European Union of Associations of Translation Companies, Sarah Griffin-Mason, Chair of the Institute of Translation & Interpreting, Laura Brandon, Executive Director of the Globalization and Localization Association and Liz Pryke, Secretary of the ATC.

Ruth Partington, ATC Vice-Chair and Chair of the ATC Conference Organising Committee commented: “Freelance suppliers are a vital part of our industry and we know there are many highly talented people working in this sector. We want to celebrate their contribution and acknowledge their hard work.

“In recognition of their value to our industry, we are delighted to offer all those shortlisted as Freelance Supplier of the Year a 50% discount on the cost of the two-day Summit. We are looking forward to receiving nominations for freelancers working right across the UK.”

Nominations, which can be made online by visiting https://www.atc.org.uk/nominations.html, are restricted to 500 words and the panel will only consider one nomination per person or team.

Shortlisted applicants will be announced by 25th August and then go on to compete in the finals at the gala dinner on 21st September at the Regent’s Park Holiday Inn, London.

The 2017 Language Industry Summit, which has been designed to appeal to the widest possible language industry audience with a line-up of international speakers as well as four challenging Master Classes, takes place from 21st-22nd September. It will be rounded off with a preview of the results of the 2017 UK Language Industry study, which will reveal current and long-term trends for the £1 billion sector.

What makes a good working relationship?

Stepping up to the plate

In all fairness, do you really want to read anything else about pandemics, the global…

In January 2020, the ATC is excited to launch an Associate Member category. This new…