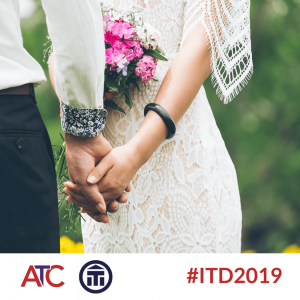 Love is the same in any language – but there may be some paperwork!

Whether it’s about being close to family, fulfilling a dream or arranging a highly memorable wedding at reasonable cost, the draw of getting married overseas is strong for many with over 50,000 UK citizens doing so every year. The average cost of a wedding abroad is about half that of a UK wedding.

Popular locations include the Caribbean, Italy and Greece. And high up on the list is the picturesque Greek island of Santorini which welcomes over 1,000 couples for weddings annually.

That would certainly explain why the Institute of Translation and Interpreting (ITI) receives numerous calls and enquiries about finding a suitably qualified translator to translate the necessary documentation for a wedding in Santorini.

Before they start wedding preparations, the happy couple will think about the weather, visas, flowers and the dress. But most couples do not realise that they will have to use a translator to meet legal requirements. Or that the work to be undertaken by the translator will depend on what country the couple has chosen for the ceremony. This can lead to a last-minute panic for some very important paperwork.

For a Greek wedding, for example, both of the couple have to obtain a certificate of no impediment (CNI) from their local register office. They then need to get a certified translation of the CNI by a translator on the Greek Embassy approved list.

Each country has their own local laws regarding marriage. You will undoubtedly need to prove that you are single and free to marry.

Documents that may be required could include:

Sometimes translation for a wedding is straightforward, and sometimes it can be more complicated. And this was the case with Joanne who was set to marry her fiancé, Eduardo, on a Saturday in Bolivia. She went to Atlas Translations, a member of both ITI and the Association of Translation Companies, to have the documents she needed translated into Latin American Spanish.

Suddenly the task became a lot more involved than Joanne or the Atlas team could have envisaged, with the Bolivian Embassy asking to have yet more documents translated and notarised. The clock was ticking, involving several trips backwards and forward to the Bolivian Embassy and frantic dashes on the eve of the wedding to the public notary. Atlas Director Clare Suttie said: “There was no way we were going to let this couple down: the possibility never crossed our minds. We know that these situations are stressful. We do recommend that couples check with www.gov.uk/marriage-abroad for all the most up-to-date information on getting married abroad – and get your translations well ahead of the big day!”

Thanks to everybody’s efforts, Joanne and Eduardo were able to marry the next day in a beautiful ceremony.

It is so important that legal translation, however apparently simple the project, is dealt with professionally and accurately to avoid any complications. And that the translator or translation company is sufficiently skilled to deal with the unexpected. And in the case of a wedding, that will mean that the special day can go ahead without any translation hitches.

You can read more about Joanne and Eduardo’s story here.

The challenge of bringing graphic novels to a global audience

There is much more to translation than simply changing words from one language to another.…