Five Star Languages is a family business based in Birmingham with over 35 years’ experience working in partnership with clients across many industries and sectors. Its reputation has been built on providing a flexible, professional service with a personal touch, focusing on delivering a bespoke level of service that is reliable, wide ranging and cost effective.

With more than 10 million appointments lost to ‘Do Not Attends’ (DNAs) costing the NHS a staggering £1 billion and mid 1990’s research recognising that a high number of women from ethnic backgrounds were missing their breast screening appointment, something needed to be done.

At the beginning of 2009 the City, Sandwell and Walsall (SWBH) Breast Screening team instigated a project initiative to raise awareness of breast screening in order to increase the non-English communities attending this all-important appointment.

The Health Promotion Project lead, Rose Isaacs, based at City Hospital in Birmingham, part of the Sandwell and West Birmingham Hospitals NHS Trust, approached Five Star Languages to help them with their campaign.

Rose Isaacs said, “nearly 50% of South Asian women aren’t attending their breast screening. We wanted to increase the likelihood of these communities making an informed choice and attending their appointments.

“We chose Five Star because they were very easy to work with, affordable, and efficient. No problem was too much and translations were easy to transfer into varying documents.”

Initially SWBH were sending out invitations for screening via letters written in English. Non-English-speaking women were unable to read these and therefore didn’t attend. Only those who had family members or friends to translate the letters, did.

“…we desperately wanted the initiatives to improve the uptake otherwise this life saving work would have been halted…,” said Rose Isaacs.

Five Star understood the urgency of the campaign and immediately actioned for this first draft of translation. They translated two essential pre-screening letters into 9 different languages, including; Arabic, Somali, Polish, Chinese, Punjabi and other South Asian languages. These were then distributed by the local GPs to ensure awareness of this vital screening within the local communities.

This vital step resulted in a positive outcome where non-English speaking women were attending their appointments. Once the first initiative of creating awareness was achieved it was time to develop upon this and create a bilingual and pictorial flyer. As part of the project Five Star translators supported the SWBH design team to ensure the text read correctly whilst working on the design specifications.

From ‘Did Not Attend’ to Life Saved

A recent report published by the Commissioning for Quality and Innovation National (CQUIN) goals found that the attendance rates for those ladies involved in the initiative, increased by 25% for women with a language barrier that had previous ‘Did Not Attend’ for their screening. 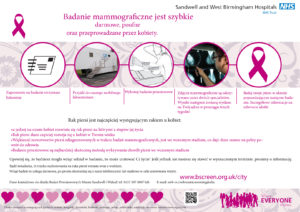 The uptake in the inner-city areas of Birmingham: Saltley, West Bromwich and Smethwick (to name a few) have all increased in uptake over the last 6 years. The baseline second appointment attendance rate increased from 11% to 23%.

This whole initiative has been seen as a huge success – having a great impact for the local communities. Breast cancer has been caught earlier and women’s lives have been saved.

Ameet Gauher of Five Star Languages said, “Five Star were so grateful to be involved in a project that is so important; encouraging to save lives, we are extremely humbled and

overwhelmed to be part of something so vital. We loved going the extra mile to help the City, Sandwell and Walsall Breast Screening team achieve a great outcome.”